We recently received quite some mails again!
Christopher wants to carry the foodsaving and foodsharing movement to Canada, Patrycja to Hamar in Norway, Nana to Manchester in the UK and Alice to Besançon in France. On that note, here's some updates about already existing projects:

This list has gotten pretty long pretty fast and it's not at all complete! If you feel that you and your foodsaving group should be mentioned as well, please write an email to foodsaving@yunity.org and we'll gladly include you in the next issue! :)

I decided to jump into more of the UI parts recently, and implemented most of the pickup management UI, and some of the store/profile editing features. It's quite fiddly to manage all the recurring pickup stuff, but I found the Vuex state management really helped me to get the logic right (or so I hope..). Being able to have a more declarative approach to state means once the state logic is implemented correctly, the rest just falls into place. 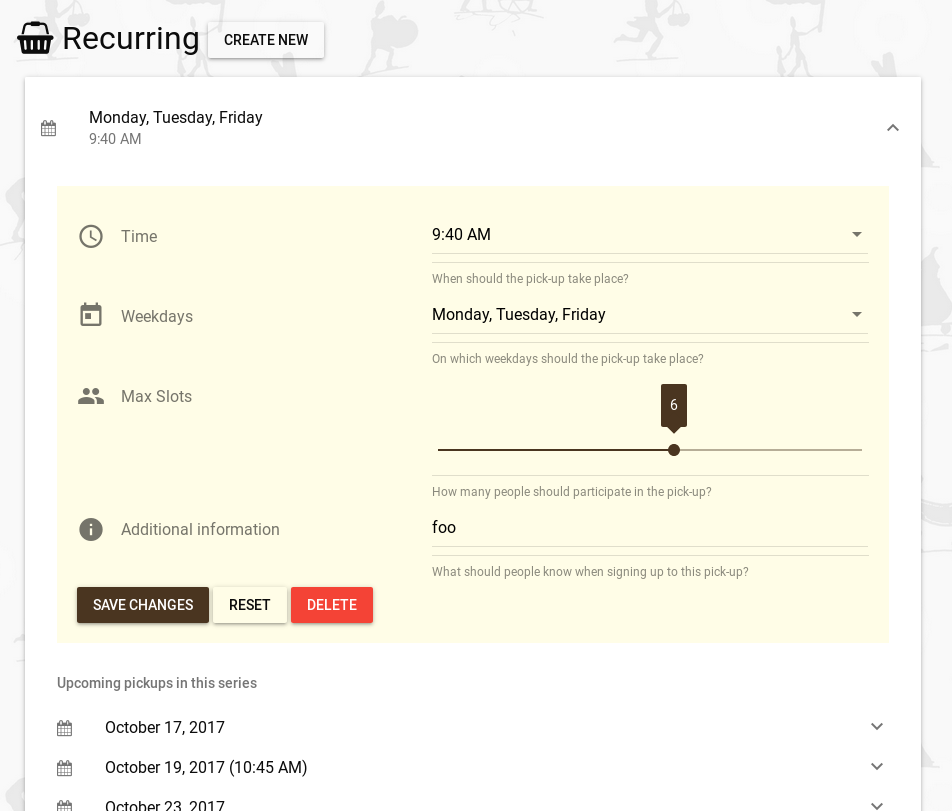 Tilmann got much deeper into database locking and concurrency issues, and is a good example of what I love about our approach to development - interest and willingness to take the time to explore the topics properly, even if ultimately we just accept the occasional concurency-related error and postpone any changes until it's a real problem. Conventional startup logic would suggest not to waste time on this, but this kind of project is not a startup, and different logic applies.

We are nearing our first release since we started our new, more structured approach (each merge request has an entry in the changelog now), and Nick and Matthias will be drinking some beer to celebrate when that happens. The surge of activity from a few weeks ago has slowed, but is still a steady stream.

We discussed with the board about finding someone to implement some new homepage content/design and added a blog post about that, so please help us find someone! (html/php/css/js coder with a bit of time)...

There now is a dedicated Gitter chat for Ukuvota, where you can request features, give feedback and talk to other users of our nice score voting app. Since Wolfi fears to run out of tasks he already went fishing for issues and collects more and more of those in Gitlab.

Max and Mona both became volunteers and plan on staying for a while! :D
We had a structural engineer over, who provided tons of useful info on what there is still to do on the very substance of the buildings. Doug continued to think about refining the process for residents to change status in the house and made an informative flow chart (It already includes the idea of a prescribed reapplication of members after six months, although this was not formally accepted yet). Mona started the topic of creating a more clear code of conduct, that will allow us to actively prevent people from behaving in a way that is racist, sexist, homophobic and generally anti-egalitarian. And since we still don't have any other power supply in the buildings than some old solar panels, I'm especially excited to present to you our new and fancy bike-driven electricity generator: 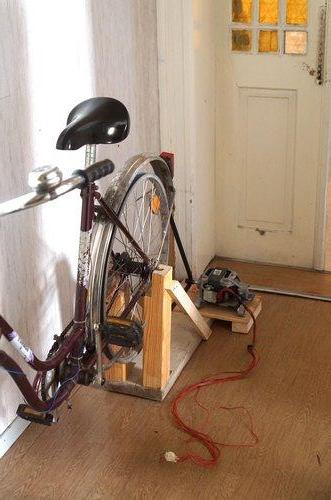 As Matthias describes it, it works as follows:

A good operating point is ~40-55W charging a 12 V lead acid battery system. Putting in a bit less the mechanical power, we were also able to achieve 70W powering a 250W light bulb (0,7A @ 100V) - meaning that the motor is turning a bit too fast to work in maximum efficiency at 12V.

But of course, he's still working on improving it! ;)