As announced in the last heartbeat, our hackathon will take place next weekend. According to the attendance sheet, we are expecting

Additionally, there will be people who are interested in having a look at the projects or will support the hackathon with food deliveries and cooking. Speaking of food: we will pick up food from lots of foodsharing.de cooperations in Berlin and made an agreement with Wilmersburger, who will send us a packet of vegan cheese.

For further promotion of the foodsaving tool at the hackathon, Laurina converted the logo into a stencil. Now we can print on shirts and other surfaces :) 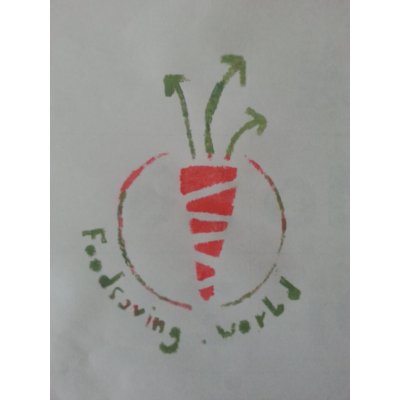 We are looking forward to meeting you in the evening of July 14th!

Next steps towards converting foodsharing.de PHP backend code into the Laravel framework have been done by Raphael W. He created a new Laravel project to try out a possible code structure. After feedback from Nick he plans to use the gained knowledge to integrate those ideas into the main foodsharing.de repository. It is unclear yet how Laravel's Eloquent ORM will relate to the recently introduced foodsharing-api, which uses the Doctrine ORM.

We got a new article about Foodsharing Bilbao on foodsaving.today, written by Unai, one of the founders.

We have weekly foodshare events at Karmela and Bilbiko Kultur Etxea. We have contacted big supermarkets such as Lidl and ALDI. We are going to present Foodsharing Bilbao and prepare food in an event organised by the Space Exchange Network and at a neighbourhood assembly. We have been invited to organise a Disco Soup in Sarean that might take place soon or after this summer. We will be live on air soon in a local radio station. We are active!

There have been a lot of discussions in the last two weeks revolving around the next steps of the foodsaving tool. Nick, Tilmann, Lars and Janina had a pad-discussion, followed by a call with Ines and Marie. We decided to prioritize a list of features for the RGSoC internship, including feedback for finished pickups and roles for rights distribution.

In a later meeting, the roadmap was restructured and updated. We categorized the issues into current development, current discussion (higher and lower priority) and ideas / brainstorming.

After some doubts regarding specific phrasings in the contract could be cleared, the two houses in Wurzen are finally being bought! The first yuniteers will go there next week already and after the hackathon work on the houses will really start!

A lot of things are happening in Harzgerode: A plant-based sewage plant is in the process of being built, so is the outdoor kitchen, that will be used for the und jetzt?! conference. Since there is so much work to do an invitation to a work camp was issued and everybody is welcome to join the team! Also, Harzgerode still is the place to be to meet with yunity people and many come by for some days to enjoy the group spirit.