Busy times. While the usual paperwork goes on, preparations for the upcoming season start slowly. Requests from volunteers willing to participate and help start piling up. Though we are honored by this we are definitely not ready yet to host or even employ those helpers. So first steps are taken. Writing down tasks, getting material etc. so the place will be prepared to become the regularly mentioned busy anthill as soon as spring arrives. 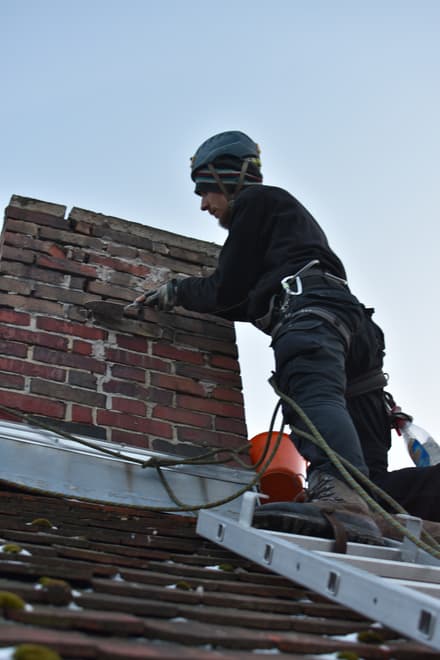 Meanwhile the chimney of Haus X is finally ready for official approval by the chimney sweeper. Unfortunately the newly installed plastic tarpaulin covering the leaking roof of the extension of Haus X just flew away in the storm. 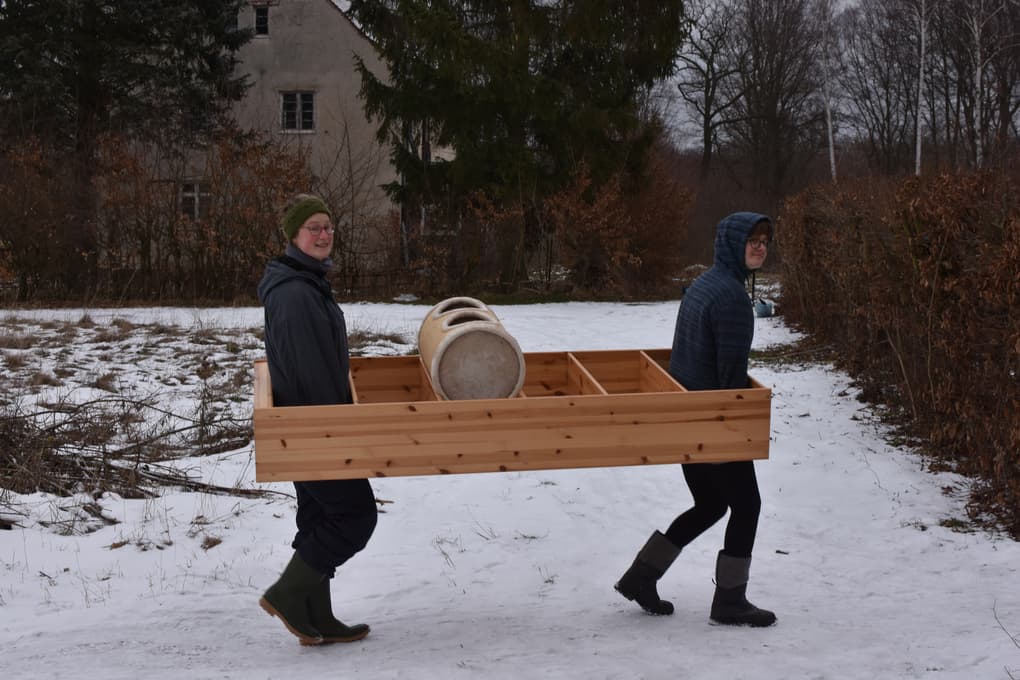 Anna and Josi carrying a shelf to its new location

We are looking forward to have a professional workshop for the use of a chainsaw at our place in two weeks, so we learn how to safely make firewood from the countless fallen trees in our forests.

We seem to have misnamed the 'Month of Calm', because in many ways it's been more intense! The energy freed up by not needing to induct new people has been invested in various sessions and discussions: Chandi held a 'cryptoparty' to help people better protect their data, the Karrot Crew demonstrated the developments they made over their work month (more below) and Nick and Matthias presented the HouseBus system—a 'smart-home' project which respects data privacy. 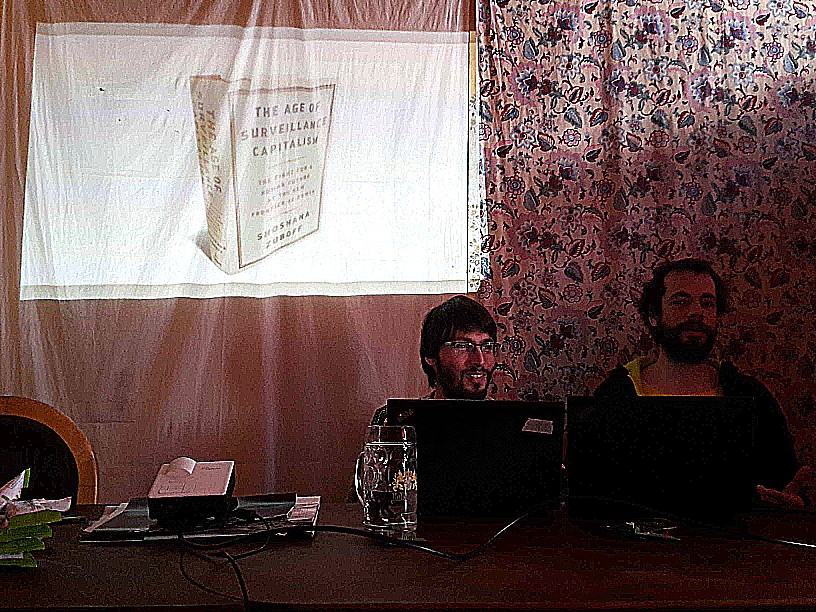 One topic that got a lot of attention was money. Bodhi, Luisa and I organized 4 sessions to investigate how the principle of 'promote sharing, prevent waste' could apply to this strange resource in the Kanthaus context. I was impressed at how open and trusting people were to share their personal situations, hopes and fears on a topic which is normally taboo. Next week we'll be trying to convert the ideas into testable proposals.

I get the general feeling the Month of Calm has been appreciated and that we'll want to hold a similar month next year.

Recently we had our first person from the U.S. sign up on our forum and immediately post super nice Greetings from Savannah. The person called wutogui is part of the Savannah chapter of Food not Bombs (FNB) and told us a lot about what they are doing with regards to saving food and sharing it with people in need. Interestingly FNB explicitly identifies not as charity but as anarchic solidarity movement that fights waste and by that is completely in line with our vision of foodsaving. We hope to strengthen this relationship and find ways to support each other regularly! :) 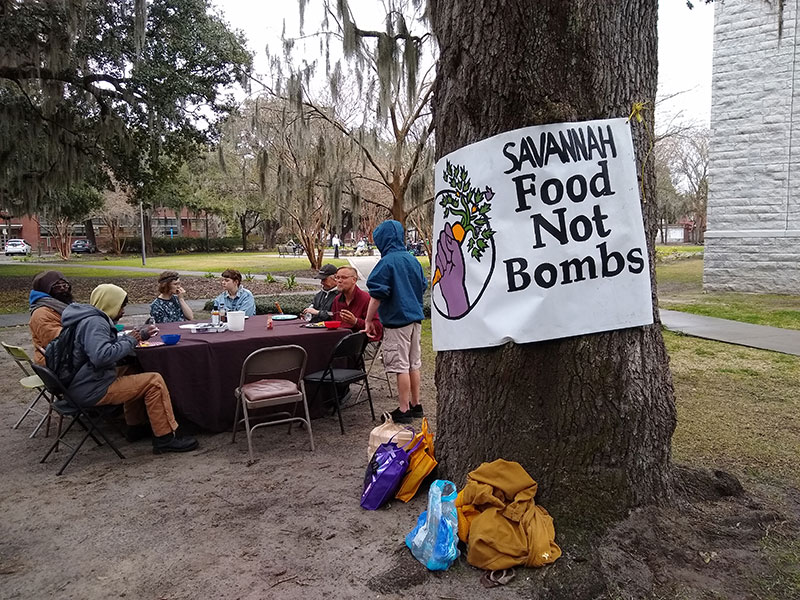 A vegan meal distribution event in a Savannah park.

There is lots going on in foodsharing development, but I'll share just one thing (mostly as it has a pretty picture to go with it).

The site has been running quite slow, and there were lots of chats about how to improve it. The mystery was that the beta version of the site was still running fast on the same server. They use the same database and redis service so it wasn't related to that and they are both running with the same version of php. One of the main differences was the beta site had 2 php workers whereas the production site had 5. So perhaps we had not enough workers?

If there aren't enough workers to serve the requests they are added to a queue, and we have been collecting the stats about the php-fpm queue length for some time now. However, it is always 0. Hmmm.

But a spark of imagination later and we realised that there is another place it can queue. Between the nginx webserver and the php-fpm process is a unix socket and that has it's own queue. And despite the myriad of different stats we collect about the server and app, that was not one of them.

The simple solution would be to just change the number of php-fpm workers, but I wanted to really know whether it makes a difference by collecting data and also make sure other things were not negatively affected.

I added stat collection for two extra things (for both beta and production) - the unix socket queue length, and the home page response time (as measured from another server). I left that running for about 12 hours before adding another 2 php-fpm workers (so changing from 5 to 7). Here are the graphs showing the impact:

Our server does not have much spare memory so adding extra workers might have been an issue - one of potential issues would show if the system started using a lot of swap, so I included a graph for that, but fortunately swap usage didn't change much.

To make it more relatable the problem was the same as when a busy supermarket does not have enough checkouts open, the solution: open more checkouts!

The remaining mystery is noticing that the CPU usage went down quite a lot (more idle time, shown in green). If you know why, maybe you should join the foodsharing dev team!

Welcome to the Karrot section, I'm Tilmann - your host! :)

There was quite some activity in the foodsaving worldwide forum about Karrot! Bruno received notable attention for a feature proposal to invite a friend to a pickup. He also wrote up a comprehensive list of notifications in Karrot and made suggestions for improvements. It's much appreciated input on the complex topic of notifications, and we will probably implement some of these improvements in the next weeks (...or months).

Nick started renaming "stores" to "places - only in the code, as a user you should not see any changes yet. We are planning to add more "place" types in future, for example meeting places, distribution & sharing locations and possibly more.

Also thanks to Nick, pickups can now have a duration. It looks like this, and you can test it yourself on dev.karrot.world: 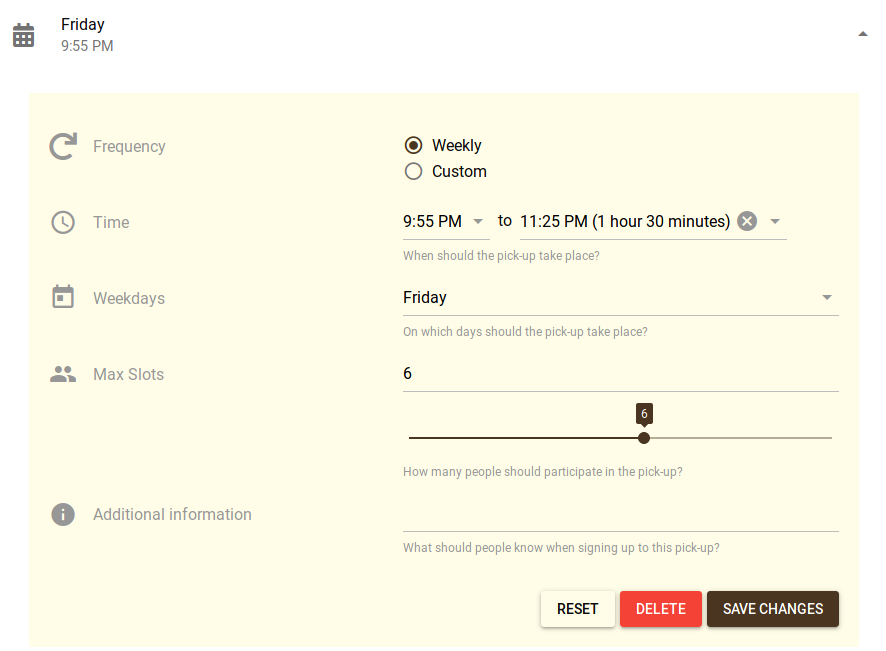 Janina worked on the conflict resolution feature, which is dearly needed by some Karrot groups. Nick and me will join in to get it into beta soon, then we are looking forward to user feedback. I'm a bit afraid of user feedback at the same time, because it probably triggers another round of feature requests... ;)

I spent my time mostly on implementing store conversations and store subscriptions. I already posted some pictures into the issue and Bruno gave me useful feedback. As a kind of prerequisite for these, I added "open pickup chats" - now every group member can participate in the pickup chat, not only collectors.